As a start to the second year studio recording and mixing project, we were placed into two groups that were told to come to studio one situated at the University of Hertfordshire with our instruments and an open mind. We went over what we needed to be done within the first session and what we should walk away with at the end of the day. Which was just a basic recording of a song to work with for our own projects. We then discussed what we could do with the project from just adding to the original or possibility of even manipulating the song so it would be totally different when finished. As a group we moved on to get two objectives done in the morning, which was set up drums for recording and get an idea for a chord progression to go with a genre of music that we were going to record.

Firstly, we started setting up the drums in studio ones recording space deciding on a recording technique that we had learnt from the previous year. We decided to use was the Glyn Jones technique as this technique itself is able to create an accurate stereo image of the drum kit. This is set up by measuring two microphones one by the low tom and the other above the snare that are equidistant from the snare itself. 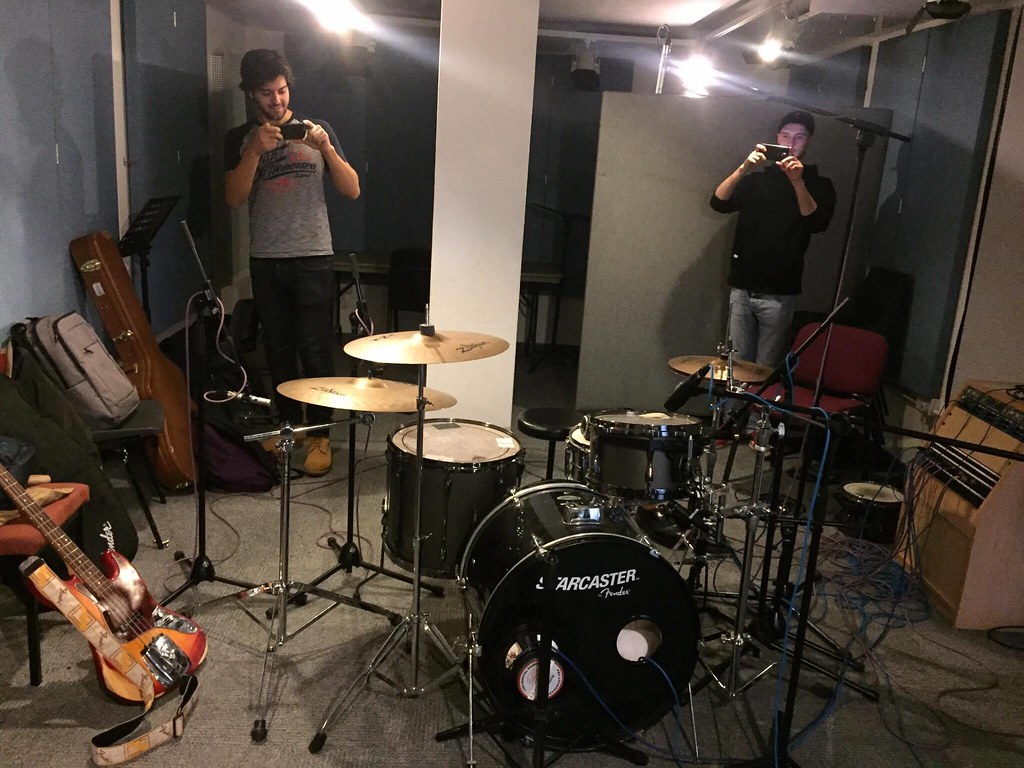 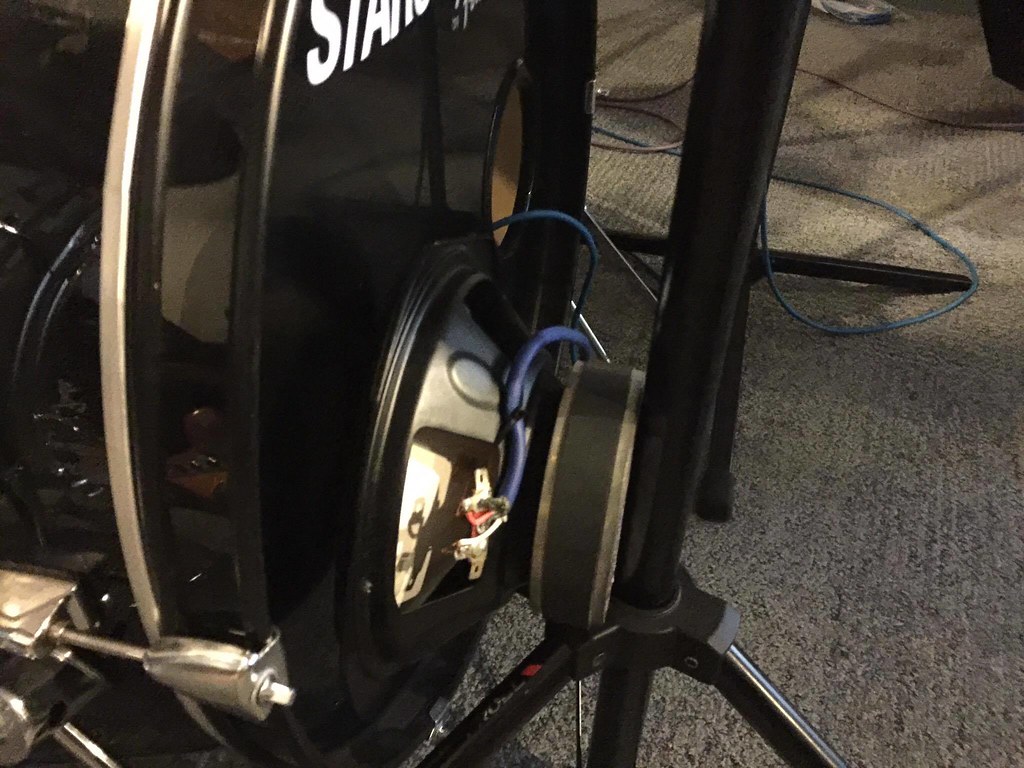 The overhead microphones we use for this were the Neumann KM184 that came as a matched pair,
the kick drum had a AKG D112 placed inside with an additional speaker attached rewired to an XLR was placed closely to the outer skin of the kick drum. This worked in the opposite way a speaker would normally work, instead of pushing sound pressure waves out from the speaker cone, the pressure waves made from striking the kick drum would move the speaker cone sending a signal down the XLR. The floor and high tom drums both had Sennheiser MD 412’s placed over the top of them. The snare was mic’d up with two Shure SM57’s one above and one below.

At this point myself, Sophie and Henry went off to come up with a chord progression. We decided on a Ska-pop/punk genre with a chord progression of E minor, A minor and B major in the verses and the chorus consisting of E minor, D major, C major, B major back to D major. While we were doing this the rest of the group were setting up inputs to the DAW through the solid state logic desk. We came back to track the drums along with a rough bassline, at this point it was patched in to the desk through a DI box in the control room.When recording the instruments, we took a few takes to makes sure that we could compile them at a later date to cover any mistakes that were made.

We then moved onto recording the Bass Guitar. This was Both DI’d and amplified through a GK bass amp that was mic’d up with the AKG D112 on the side of the cone and a Shure SM57 in the middle.  I should also note that I placed a room microphone (the AKG C414) to capture the room sound that could possibly be used in our projects depending on what we decide to do. Henry had the drums set up in his headphones to play along with, myself with the rest of the group were monitoring in the control room of Studio One.

Later on in the day, we moved on to record the Guitar. I was playing, this gave me a chance to experience what it was like to be the recording musician, playing along to the bass and drum parts that were already tracked. The amp was a Fender Twin Reverb with a bright sound, this too was also DI’d in to get the raw signal of the guitar if we wanted to add effects in logic or Re-Amp. The microphones were set up making use of both speaker cones and the back of the amp. Two SM57’s were used, one side-on to the left speaker cone, another slightly off centre and a few inch’s back from the right cone. To capture the bass frequencies, we also placed the AKG D112 in the back of the amp. I proceeded to play along with the bass and drums recording multiple takes. 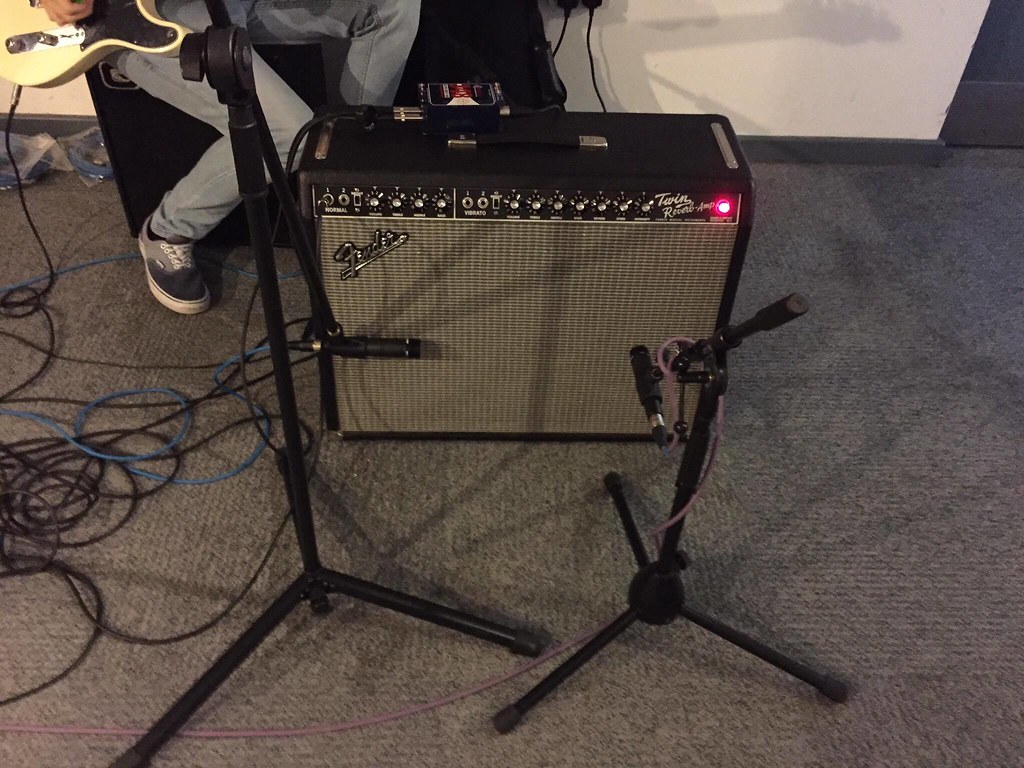 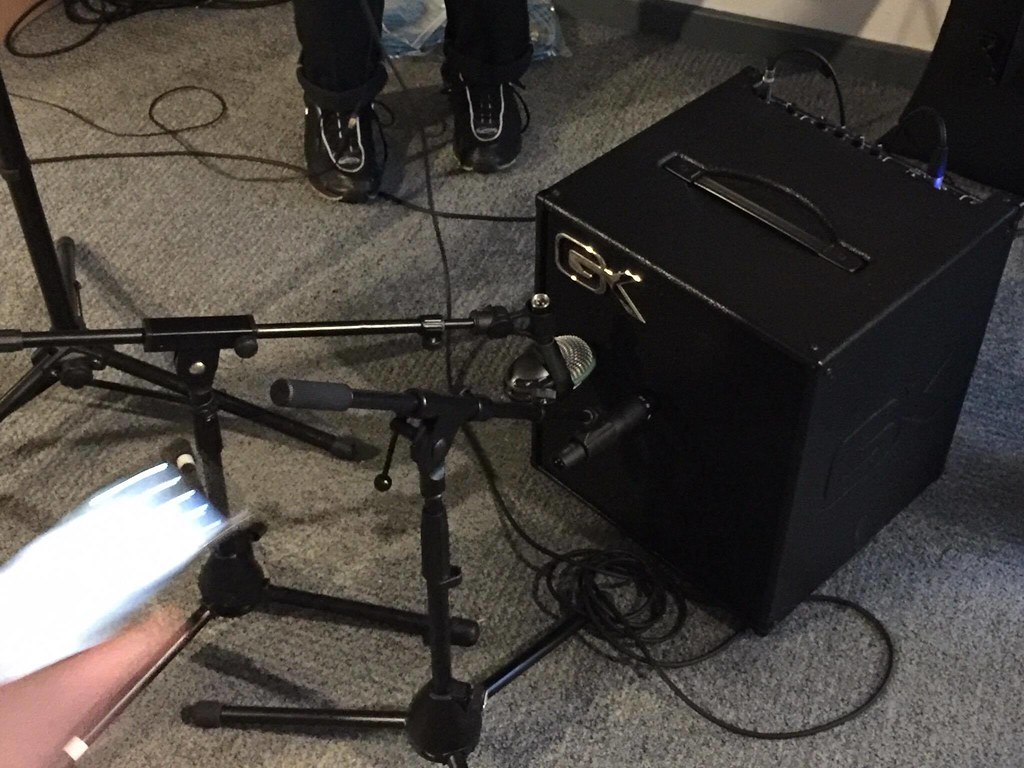 We then wanted to get a few extra bits of recording done before the day had ended. We chose to get some vocals tracked where Sophie improvised over a few takes with Charlotte, Anna, Etienne and Boris doing some shouting between. As the recording session was coming to an end Sophie also tracked synth within in the listening room to provide keys for the track. For how short of a period we had to record, I think we got quite a lot done! Now to see where we can go with this project.